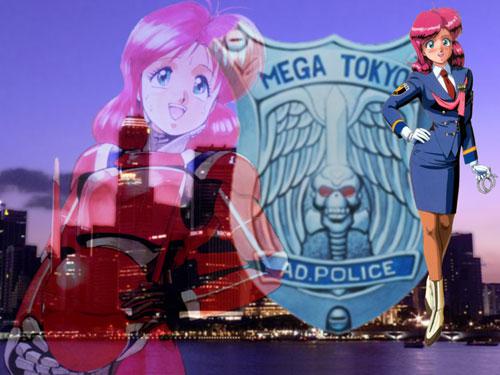 Nene Romanova is a member of the Knight Sabers, acting as a technical conductor and hacker, and is an employee of the AD Police, functioning as the Knight Saber's mole in the ADP world. She is bubbly, naive, and blissfully inept with real world logic, and she is often teased for not being more physically durable. She has an affinity for candy and junk food. Her pink hard suit's offensive weapon is a weak laser gun unsuited for taking out enemies; instead it is used to scribble the Knight Sabers' signature onto their scene of actions. She relies on her suit's computer and electronic warfare systems to stay away from an enemy. In Bubblegum Crash, her suit's offensive capabilities were stocked up considerably with an electromagnetic pulse striker and the capability of physically hacking into a boomer's computer brain.